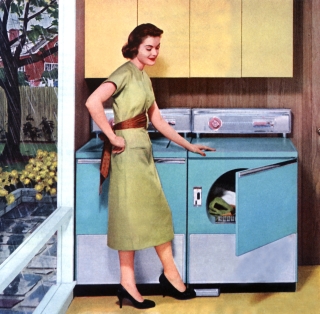 Last week, I had myself pretty convinced that my household appliances were plotting against me.
It began when my vacuum sweeper decided to get temperamental with me back in December.  (She’s still plugging along, but I am not sure how much more I am willing to put up with.)
Then, as you may recall, it was my refrigerator.  (Oh, blessed timing.)
Last week, it was my washing machine.  I went to the basement to switch the laundry into the dryer, when I realized everything was still sopping wet.  Drenched.  Deluged.  (Hmmm.  Spin cycle, much?)  The normally plastered-to-the-sides pile of clothes was soaking in a heap at the bottom of the washer.  I set the washer to spin again, thinking it a minor fluke.  Ten seconds in and the hot aroma of something terribly wrong arrested my senses.  Stop the machine.
My eyes shifted to the neatly sorted piles of laundry awaiting my attention.  I blinked back tears.  This couldn’t be happening.  I looked back at my machine with severe disdain.  Don’t you know we are in the midst of some pretty intense potty training here???  How could you?
Dear hubby arrived home for lunch.  The conversation went much like the refrigerator variety only a couple of weeks prior.  He wanted to try to repair it.  This time I didn’t fight.  I just needed it done.
DH claimed operator error.  (Very funny.)  I had a hunch.  A theory.  What if one of those tiny little girl socks had creeped over the edge of the basin and lodged just so that it jammed the spin cycle?  He balked and still cried operator error.  *sigh*
Three days later, (and laundry accumulating all the while…) my sweetheart finally made an attempt to fix the washing machine.  Thanks to the manual, YouTube videos, and the company of a friend, he managed to disassemble my nemesis.
And lo and behold… a tiny sock wedged.  Just so.
I was half-right.  But to be fair, so was he.  This “operator,” in a zealous quest to conquer the laundry overfilled the machine.  Again.
Guilty.  As.  Charged.
If anyone needs me, I will be up to my eyeballs in a week’s worth of laundry.
But not until after I’ve had a coffee… or two.
Continue the coffee love by joining my facebook page:
Blue Jeans & Coffee Beans.