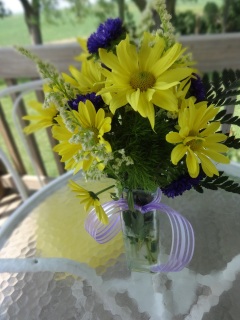 Holly von H. is gone.  It hurts so much to type those words.
Yesterday was easily one of the most horribly terrible days of our lives.  The day started out so well.  We were coming off a lazy 4th of July, still high on sparklers and the smell of gunpowder.

It happened in mere seconds.  Seconds, I tell you.  And life was suddenly different.

She always had a fascination with wheels, be it a stroller, a wheel barrow or… a passing car.  *sigh*

It happened in front of the house, right by the mailbox.  I cannot begin to tell you the mass hysteria that ensued.  The lady driver was visibly upset, as well as her young son who accompanied her.  The Man was running to her and sobbing.  I ran inside to shelter my girls, but it was too late.  Cupcake was napping, while the other girls held each other tightly, hysterically looking on through the bay window.

The Man cradled her in the road as she passed.  I held her lifeless body soon after, bathing her in tears, and telling her how sorry I was.  There are so many disturbing images from yesterday that I wish could un-see.

The woman turned out to be a neighbor from down the road whom we hadn’t before met.  Her husband came soon after to offer his help in burying her.  The woman came again even later to bring flowers.  I assure you this is not the way we wanted to meet our neighbors, but I am grateful we have good people living close by.  They were so kind.

One second she was pawing at the front door and the next she was gone.  There is much sadness in this house.  The homestead feels so empty without her.  She was our first family dog.  We waited so long for her.  I find some sort of patriotic irony in the fact that she was born on 9/11 and passed the morning after Independence Day.

Ladybug whimpered through tears, “You told me I would have her until I was at least 16!”   Lovey said, “But God’s still alive.  He’s in my heart and my heart is not broken.”  Peanut just buried herself in the couch pillows and cried.

And The Man is a mess.  And so am I.  I loved Holly.  And him even more so.  No one ever told me it would be this hard.  I am not even an animal lover by nature, but I love the life that God created.  And Holly was special.  And she was ours.  And I miss her.  And even coffee can’t fix that.

“The Lord is close to the brokenhearted
and saves those who are crushed in spirit.”
Psalm 34.18 (NIV)

To read more about our sweet Holly von H.:  A Boy and His Dog.

2 thoughts on “And then she was gone.”