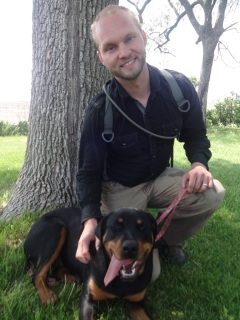 Her name is Holly von H and she’s quite possibly the sweetest Rottweiler in the history of ever.

The Man did not tell me.  Supposedly he was at the office.  On a Saturday.  And it wouldn’t take long.  (Ha!)

I called to see what the hold up was.  “Work.  Lots and lots of work.”

Hours later… (lots of hours later), The Man arrives home with a puppy.  A very large, 7 month old Rottweiler puppy.  Nevermind the fact that we had a weeks-old infant in the house at the time.  The girls were in love.  Me?  Less so.  I don’t think I have ever been (or ever will be) an animal person.  I prefer to appreciate them from a distance.  But Holly…

The next morning, I awoke to a sloppy, wet, UN-human kiss all over my face.  I could barely breathe beneath all crushing 70 lbs of her. I didn’t want this to ever happen again.

I. Don’t. Do. Animals.  At least not this up close and personal.

But The Man is crazy about her.  And she loves him, too.

3 months later.  Holly and I are becoming friends.  Even though she buried my socks in the neighboring field.  And wiped her muddy paws all over my freshly washed white comforter.  And rolled in critter poo before our evening cuddles.

Holly von H, you are a keeper.