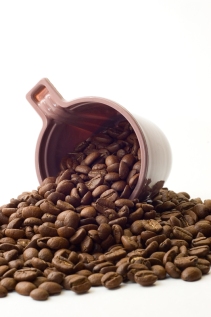 The seething pain began pounding into my brain, much like someone hammering a nail right between the eyes.  For twenty-four hours.  Relentless.

It’s official, everyone… I’m addicted to caffeine.  Without coffee, apparently I am useless (and according to my husband, a trifle grumpy, too.)

Perhaps it shouldn’t be so surprising (this is a coffee-themed blog, after all), however, I was still caught off-guard.

Yesterday, we were running late for a field trip to the Pumpkin Patch.  I skipped the coffee simply because there was no time, and thought nothing of it.  Fast forward two hours, as I am riding a jaunty little choo choo train around the pumpkin patch, my brain in protest from lack of caffeine, and I just wanted to find a dark corner and curl up in the fetal position until the pestilence had passed.

By the time we arrived home, it was much too late to drink coffee (I do like to sleep eventually) and I was still trying to convince myself that my ailment was the result of dehydration.

A handful of dark chocolate took the edge off as I prepared for bed, but I awoke again this morning with a Goliath headache.

Two Tylenol and one cup of joe later… all is well.

Perhaps it’s time to cut back?  Probably.  But, no thanks.